By Lewis Perdue on July 24, 2019 in Best Practices, The Study – Deconstructed

When does processing become “ultra?”

It’s vital to recognize that very few good products are unprocessed. Those would include items such as raw vegetables and eggs. Many more familiar foods are “minimally” processed including cookies, bread, pasteurized milk, raw meat, and chicken.

The line at which processing crosses the undesirable line is somewhat fuzzy.

The article places the blame on ultra-processed foods which it enumerates as:

“mass produced packaged breads and buns; sweet or savoury packaged snacks; industrialised confectionery and desserts; sodas and sweetened drinks; meat balls, poultry and fish nuggets, and other reconstituted meat products transformed with addition of preservatives other than salt (for example, nitrites); instant noodles and soups; frozen or shelf stable ready meals; and other food products made mostly or entirely from sugar, oils and fats, and other substances not commonly used in culinary preparations such as hydrogenated oils, modified starches, and protein isolates.”

It’s noteworthy that both sugars and salt — which are added to UPFs with a heavy hand — are contaminated with nano-and microplastics which have their own inherent PDC contamination issues.

“Industrial processes [that] notably include hydrogenation, hydrolysis, extruding, moulding, reshaping, and pre-processing by frying. Flavouring agents, colours, emulsifiers, humectants, non-sugar sweeteners, and other cosmetic additives are often added to these products to imitate sensorial properties of unprocessed or minimally processed foods and their culinary preparations or to disguise undesirable qualities of the final product.”

While the BMJ article focused on the nutritional downsides to processing, it’s vital to recognize that each processing operation and additive — regardless of nutritional value — brings with it its own unique contamination trail and chemical burdens that are incorporated into a highly processed food product for sale.

Why are Ultra-processed Foods (UPFs) higher in Plastic-Derived Chemicals (PDCs)?

The increased use of plastic to replace metal and glass components in food processing machinery means higher PDC levels in all foods regardless of whether the food is ultra-processed or minimally processed.  However, increasing the number of processing steps increases the probability of a higher level of PDCs. (See citation links below photo)

Substances added to UPFs are also products of industrial processing methods whose techniques are not well-known due to trade secret issues.

UPF’s health issues derive not only from numerous additives, but also because of excessive levels of salt, sugar, and other sweeteners such as high-fructose corn syrup which are added as flavor enhancers thought to encourage over-eating. While micro- and nanoplastic particles are ubiquitous in our environment and food, every additional ultra-processing step not found in minimally processed foods adds to the overall diet’s PDC burden.

Plastic use in food processing : Sanitary, strong, versatile (with a dark side when ultra-used) 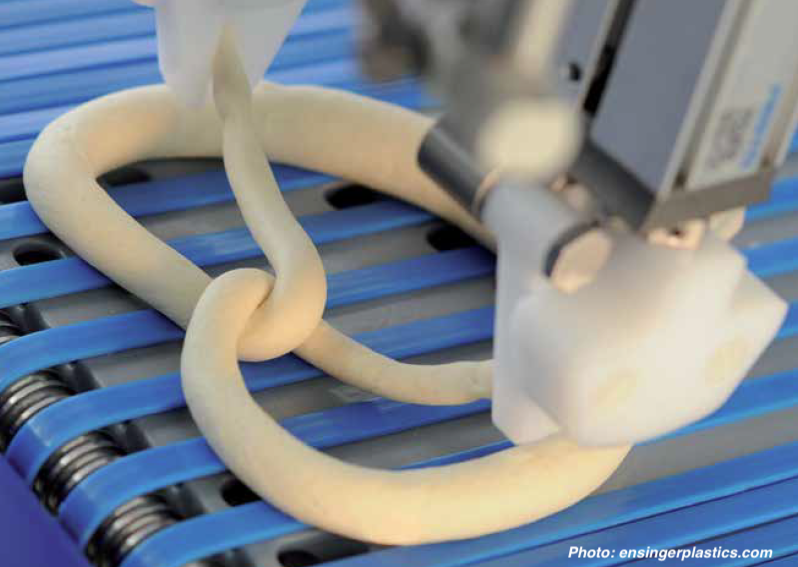 Plastic contact with food is increasing as it replaces food processing machinery which once relied almost entirely on glass and metal.

Lipophilia: for the love of fat

In the scientific terms, fats and oils are known as lipids. Lipophilia means a “love of lipids.” Fats tend to be solid (or relatively so) at room temperature and oils, liquid.

Inexpensive, mass-produced fats like those used in UPFs, involve frequent plastic contact. Significantly, BPA, phthalates and many other harmful environmental chemicals are “lipophilic” — they are easily dissolved in fats and oils.

This should not be surprising because most environmental chemicals — including endocrine disruptors and pesticides — are derived from petroleum. The same goes for artificial fragrances, flavor enhancers, and food coloring as well as plastics in general, and the printing inks used in them.

What this means is that contact between plastic and any form of food-based oil or fat results in increased migration of BPA, phthalates, and other lipophilic chemicals from the plastic and into the edible portions of the food.

Many well-designed, peer-reviewed, published studies have shown that Bisphenol A acts as an “obesogen” that can disrupt the metabolic process and result in the preferential storage of fat rather than its use as energy.

The migration of PDCs like BPA, phthalates, and other lipophilic chemicals is preferentially accelerated when placed in contact with lipids.

Why plastic isn’t just plastic: This is how the food chain gets contaminated by plastic chemicals
Stealth Syndromes Human Study – The Protocol